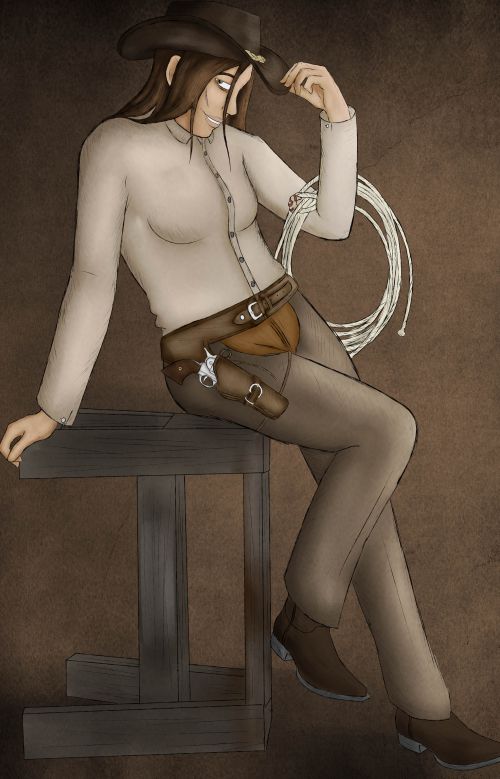 Araceli “Ara” Vasquez was born in Dallas, TX in 1861, just after the start of the Civil War. Ara’s father, Domingo Vasquez, had emigrated from Mexico with his wife Ana Maria just two years before. Domingo was a well-known lawman in Mexico City, but things became dangerous after he killed a local gang leader during an arrest gone wrong. He heard that there was a call for lawmen in Texas and was hoping for a fresh start, so made the trek north with his wife and only a few belongings.

Domingo began as a deputy in the recently-formed city of Dallas, but quickly caught the attention of Jacob Frances, the regional leader of the Texas Rangers in the area, when he busted a ring of twenty horse thieves all by himself. Frances recruited Domingo into the Rangers and promised to assist him with naturalization despite major pushback from the group’s leaders for allowing a foreigner to be a Ranger.

Thomas Saltus Lubbock, a highly decorated Ranger with powerful local influence, learned of Domingo’s appointment and threatened to have Frances removed from the Ranger ranks. However, Frances swayed several of the other leaders with his signature calm yet steely resolve and Domingo’s impressive record, and after much deliberation Domingo was allowed to stay on as a Ranger.

Domingo spent the next eighteen months proving himself, and for his efforts was elevated twice to the rank of Lieutenant. Soon, Ana Maria became pregnant and the couple welcomed their daughter Araceli into the world in early 1861. However, things were made more difficult as the country raced toward civil war. Domingo and Ana Maria’s citizenship efforts had been held up by Lubbock and other men who opposed Domingo’s appointment, and as the war began the couple feared that they would be deported. However, Lubbock had other plans. He ordered that Domingo be shipped off to the front as soon as the war broke out, only two months after his daughter was born. Facing a difficult choice, Domingo eventually decided that he wanted to stay in the US and went along with the order.

Ara’s father didn’t return from the war for six years, and in that time she grew to be a precocious and outspoken child, giving her mother lots of gray hairs with her constant questions and antics. They continued to live on Domingo’s Ranger pay, however Ara’s mother was still technically an illegal alien and to avoid notice they moved to the outskirts of Dallas where Ana Maria took a job as a serving girl at a local saloon.

Suffering a serious leg injury that left him lame, Domingo returned from the war in 1867 and re-settled their family to northern Texas, ironically near the town that would soon bear the name of his tormentor: Lubbock. At this time the area was unincorporated and near the heart of Comanche territory so things were quite dangerous, but Domingo was sure that no one would bother them here.

The next year Ara’s younger brother Enrique Vasquez was born, and as skirmishes with the Comanche ceased, the family settled into a more peaceful life. Ana Maria worked out of the home and Domingo collected his pension and stayed home with the children most of the time, occasionally consulting with the Rangers in the region. Ara idolized her father, thinking that she too would become a law-woman one day, and hung on every word of her father’s advice and stories of his time with the Rangers and at war. He strongly regretted getting involved, as he certainly didn’t believe in the South’s cause, but felt that it was his duty. As Ara got older her father began to tell her some of the stranger stories about things he had encountered during his active duty, though her mother didn’t like it. Enrique on the other hand was quite an introverted child and didn’t get as much attention from their father. He always resented how close Ara and Domingo were.

At twenty years of age, Ara took the path that she had always hoped for and became a deputy in Lubbock. Domingo was thrilled, but his health had been failing for the last year and he finally passed away soon after. Enrique was deeply affected by his father’s death and ran away from home and joined a gang of outlaws at only fourteen, which broke their mother’s heart. Ara promised her mother that she would bring him back home.

Two years passed, and Ara’s efforts to bring Enrique home were unsuccessful. She came up against the gang several times but was never able to capture them, though she was doing quite well with her other work in law enforcement. That year Jacob Frances, now a Colonel in the Rangers, recruited her as he had recruited her father. Things were easier now as the war was over and the Rangers were accepting women into their ranks, and the fact that she was a full citizen. Frances trained her personally for a few months and then had her transferred to Brimstone, New Mexico underneath Lieutenant Willard Leighton. Ara was eager to prove herself in her new position.

Ara spent most of her early time in Brimstone learning about the activities of the local "troubleshooters" and eventually being hired to go on missions alongside them to combat local criminal and supernatural threats. The Lieutenant was not pleased with this, but Ara thoroughly defended her actions in her reports, saying that eliminating local threats was "essential to the survival and growth of this corner of New Mexico, to which I have been assigned responsibility." Overall she was not satisfied with the leadership of the Rangers nor the responsibility of the role, but felt that she was honoring her father's legacy by continuing on.

After a few months of local troubleshooter work and liaising closely with Sheriff Benjamin Torres to jail criminals, she began an on-and-off-again romantic relationship with Deputy Jackson Tanning with whom she had shared several missions. After her experience with the Rangers did not improve, she decided to re-evaluate her priorities and exit their ranks, making peace with her sense of responsibility to her father. She continued full-time troubleshooter work for several months alongside Tanning and others.

Things were going well for a time, until her brother Enrique resurfaced, with reports of his gang The Devil Boys causing trouble near Folsom, NM. She was determined to keep this last promise to her family and bring him in. Deputy Tanning offered to help, but she refused and broke off their relationship, hoping to protect him from the gang which was legendarily violent. She gathered intelligence for a couple of days, working through the information at the Sheriff's Office in Brimstone, and ran across something that she did not expect: a letter from Sheriff Benjamin Torres to his deceased father confessing his crimes as Billy Blackstone, a well-known criminal from the 1860s who robbed banks and murdered several people. Vasquez confronted the Sheriff with this information, and he promised to assist her in bringing her brother home in exchange for her silence on his past.

The mission to Folsom was a bust, as the Devil Boys had already stoked a range war between two local ranches and violence was escalating there. Vasquez and Torres tried to intervene, but Torres was wounded badly by gunfire. Ara got him to safety, but by then Enrique and most of the gang had already escaped, moving north into Colorado. After the range war was quelled, Ara headed back to Brimstone, disillusioned.

Shortly after this, Sheriff Torres was murdered in a duel by Sammy Lions, and Tanning became the acting Sheriff of Brimstone. Ara pledged to help him as a deputy, and their relationship tentatively resumed. Tanning shared his wish of running for Sheriff in the upcoming election, however Ara felt strongly that she owed the town, and Torres, to protect it and she also wanted to run. Tanning agreed to withdraw and help her with her campaign.

A week before the election, during the 1884 Brimstone Poker Tournament for which she and Tanning were providing security, Ara privately let Tanning know that she believed she was pregnant.

Though Ara was unsure of herself and found public speaking difficult, Ara ran a successful campaign for Sheriff with the help of many supporters including Tanning, who gave large sums of money toward her cause. She ran against Vance Rodgers, who was a wealthy investor and had the backing of William Blakeley among others. The race was close, but Vasquez was able to claim victory. At the end of the campaign, Tanning presented her with an extremely expensive customized rifle and an engagement ring. After the shock wore off, she gladly accepted his proposal.

Several months later, in the fall of 1884, Ara was now known as Sheriff Ara Vasquez-Tanning, having been married and taken his name and operating as county sheriff and marshal of the town for a while. She was over four months pregnant at this time. Tanning himself had accepted a position with the U.S. Marshals, so Ara retained Lilith Mayfair as a deputy and hired Ken Haley and several others to assist with keeping the law in town.