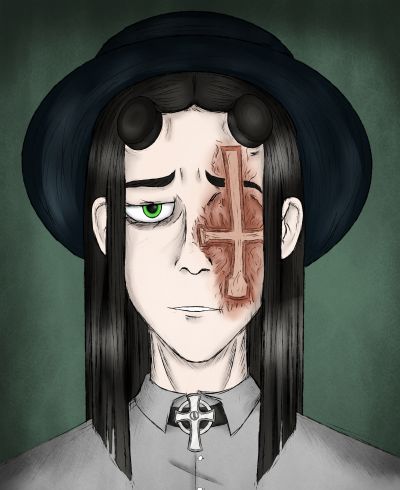 She hides the brand partially with her hair and keeps her hat lowered over her horns. 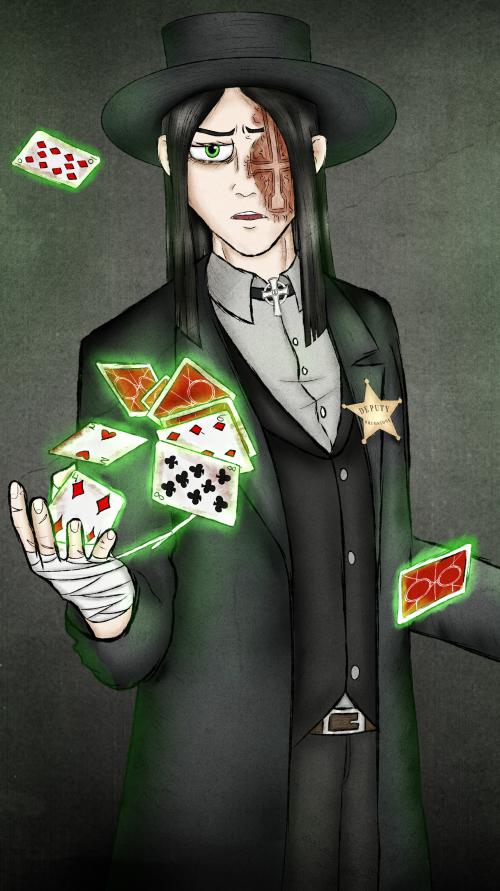 Lilith "Lily" Mayfair as of September 1884. She hides her face less often now.

Lily was born as Lilith Mayfair to her parents Gideon and Minerva Mayfair on May 18th, 1856. She was born with small black horns, silky black hair and bright green eyes. Her family lives in a compound in Nevada. A few aunts, uncles, cousins, her mother and father and her two older brothers.

The Mayfairs are an offshoot branch of Whateleys, but are not involved in the main politics or schemes of the main branch. The Mayfairs work with dark magic/blood magic, working for other branches for small to medium sized jobs that need their expertise.

Lilith was very talented with her family's blood magic and the card of magic of Hoyle's Book of Games. As she had a such a visible Whateley taint (her horns), she was kept in the compound to learn and assist in small magical things as practice.

Lily's relationship with her family was decent enough growing up. Hiram and Zeke were closer (being brothers). Lily loved her brothers but was terrified of Hiram's darker half and what he would do or make Zeke do to scare her. For example, Hiram would find her hiding during Hide and Seek and lock her in the cabinet she was in then conveniently ""forget"". Leaving her to cry and struggle to get out of the cramped dark until either Hiram came back or her parents found her.

It wasn't until her late teens (around 17-18) did she gain the privilege of going out of the compound for errands as long as she kept her horns hidden. Eventually, during an errand she heard music from the town's church. It sounded beautiful. She slipped inside the church during the service and listened to the music, the sermon. Something in her... ached. Her eyes teared up and her chest ached. The preacher talked about how anyone could be saved. How anyone who did good could be loved in the Lord's eyes. She stole a bible from a pew as she left, humming the hymn she heard in the church. Her privacy privileges allowed her to hide the bible in her room, reading it during the night. Her trips into town for her family were used to visit the church during sermons. Her attitude towards herself and her family's work became soured. Lilith made excuses which began raising suspicions especially with her brothers.

It was her 19th year when it came to a head. An argument between her and her brothers escalated into her denouncing her family, calling them all evil. This infuriated her brothers. Zeke held Lily down, so much stronger than Lily, tying her down as Hiram prepped a special blood ritual and branding iron. Hiram branded Lily's face with an upside down cross, a sickening bloody sizzle burning the curse into her skin. When they untied her, Lily was abandoned in the desert by her brothers. Bleeding and in pain, she prayed silently as she walked to the town. Lily was terrified of anyone seeing her but she went to the town, getting there during the night. There was no one there. She took shelter behind the church, using her magic to heal her face enough to stop most of the bleeding. Weeks later she built up the courage to take a saw to her horns and filed them down.

Years later, Lily now travels without a home to return to. Killing and ridding the West of the evil her family branches have spread. She has come to Brimstone in her travels as a place to take time to rest. And to suss out any evil that may be lingering in the shadows of the boomtown of Brimstone.

Months of being in Brimstone had Lily growing a relationship with Deputy Dell Gunnarson. They grew close and when Dell ran from town to avoid legal ramifications, it broke her heart and destroyed any confidence she had built up. She was cold like she was when she first came to Brimstone and deputized by Acting Sheriff Tanning in the aftermath of the failed Jail Break by Sammy Lions and his hired muscle.

During a mission with the Explorer's Society, Lily met a local Shan Fan photographer named Hei Lee who immediately became infatuated with her. With some wingman persuasion from Tanning, the woman came back to Brimstone with the group. Lily and Hei aren't in a confirmed relationship but it does help that Hei's compliments have slowly built up Lily's confidence.

Leading up to the election Lily along with her cousin Jacob Toso were kidnapped by a distant family member named Alpheus Whateley, who originally was hired to bring back Jacob.

Currently, Lily is still working as a deputy but now under Ara Vasquez.