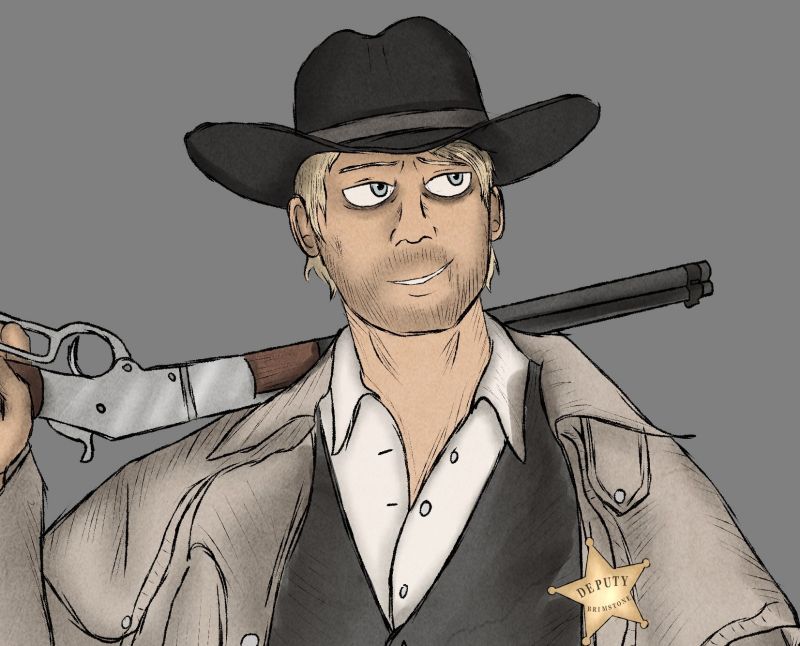 Appearance: Jackson is 5'10" with sandy blond hair and gray eyes. Jackson is very lean and muscular that complement his striking facial features, making him one of the most attractive bachelors in Brimstone. If he could only get over his recent break-up with Ranger Ara Vasquez.

Background: Jackson Tanning was born 1855,several years before the Civil War broke out. In Harrisburg Pennsylvania, not more than a stones throw from Gettysburg. This was an inconsequential fact about Jacksons life until 1862. That was until the battle of Gettysburg happened. The Tanning family were and still are strong Abolitionists and Unionists. All of Jackson's 11 siblings enlisted in the Union army at one point or the another during the war. Only two of Jacksons siblings did not return in a casket. Jackson and his oldest brother Thomas. Thomas was maimed at the Siege of Vicksburg, losing his leg and was no longer able to serve.

Jackson enlisted at the age of 16, and his kid sister Elizabeth tagged along. Elizabeth was not old enough to fight but joined the regimental band. The most scaring memory for Jackson was battle of Washington. Jackson's unit the 251st Pennsylvania was a green regiment and as such was stationed as home guard at Washington D.C. However due to its position on the field the regiment was caught in some of the thickets of the fighting of the day. The 251st made a good accounting of itself holding firm under intense Confederate infantry assaults; before being ordered back as most of the rest of the Union line collapsed. The 251st was making an organized withdraw, before it turned into a route as the Confederates unveiled a new science weapon, the Flamethrower. Panic consumed the parts of the regiment the fire did not. In an effort to rally the shattered regiment, the commanding officer colonel Dobbs, organized the regimental band to cut through the din of battle. It was a futile gesture, as any large grouping of soldiers attempting to fight were targeted for immolated by Confederate flamethrower teams. Jackson sister Elizabeth along with the entire regimental band was hit from multiple sides by flamethrowers teams. Consuming colonel Dobbs, the band, and the regiments color guard in sickly green flames.

Jackson tried to run to his sisters aid, but was saved from himself by several of his friends as they dragged Jackson back to what was left of the regiment, as it retreated. Jackson can still see Elizabeth and the color guard burning to death in that sickly green flame, whenever he closes his eyes at night. When General Mead gave his speech before for the great counter-offensive. Jackson was spent, hollow and dead on the inside, but he knew that all these deaths had to mean something in the end. He fixed his bayonet and shouldered his rifle, and steeled himself to fight over the same ground and the grizzly scenes that awaited them. This time the Union Soldiers were ready for the flamethrower and other worldly devices they encountered. Taking careful aim the soldiers of the 251st consecrated their fire at the enormous fuel tanks on the back of rebel soldiers. When ruptured in this manner the Flamethrowers would explode in gouts of green flame. The ranks of the confederates were decimated in this manner. Causing the Confederate army to panic in much the same manner as the Union had the previous day. To Jacksons surprise, this brought him no joy, killing these rebel soldiers, the same ones that had likely killed his kid sister; It Brought no relief to the pain he felt over her loss, and the loss of all of his other siblings. He could still see his Elizabeth's face, blackened and chard when he closed his eyes.

Jackson was with the Army of the Potomac on its drive through the heart of the CSA all the way to Appomattox. By the end of the war, Jackson needed to get away from the east, and his memories of battles long past. He made his way out west. Playing cards and working on ranches, neither of which he was particularly good at. At least not enough to make a living. Once again Jackson ended up earning a living doing the only thing he ever learned to do well gun fighting. Jackson moved from frontier town to frontier town drinking and shooting. Mostly working as a deputy, but sometimes as hired muscle for a local rancher. Jackson never liked bullies and this would often land him in trouble. Eventfully Jackson made his way to Brimstone. Hearing of money to be made and land to be tamed.