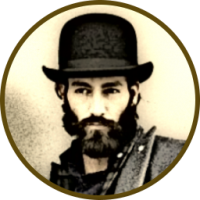 Rusty Graves looks out over the vista and scans the horizon of the New Mexico territory. Due south Rusty sees a plume of smoke and hears the unmistakable scream of burning ghost rock. It's not far now to the town of Brimstone and Rusty wonders what new "adventures" this young town might bring. Rusty is getting awful tired of trying to outrun the devils that nip at his boot heels but reckons he's about due for a little calamity. Might as well make the most of it before it comes. It always does.

Rusty lights his last cigar and ponders his life to this point. Chewed up and spit out all the way from Halifax harbour to the Rocky Mountains and all places in between. Rusty is convinced that he's just plain cursed. And he may be right. Russel "Rusty" Graves was born in 1854 to an impressionable young lass and a British soldier garrisoned in the Nova Scotia colony. Rusty's father was the seventh son of a seventh son, and Rusty himself was his father's seventh son. Nevermind that all six of Rusty's brothers come from different mothers scattered across both sides of the Atlantic, but that's another story.

At the tender age of 15, Rusty talked his way onto a steamship bound for Baltimore. The steamship caught fire and nearly sank off the coast of Portsmouth, New Hampshire. After a few years of odd jobs and bad decisions, Rusty's smart mouth and sharp retorts got him stabbed in a Boston tavern. He ran afoul of both sides of the law and was run out in New York City for "independent" bootlegging with barely the clothes on his back and a broken leg that never quite mended right. By that point, the cold Atlantic seaboard had lost its adventurous appeal and on the eve of his 21st birthday Rusty decided it was time to follow the sunset. Stories were starting to reach his ears how a man could make a new life out west if you could stomach it.

In the dozen or so years that followed, drifting from town to town, chasing the sunset, the next job, or the next girl, Rusty always managed to find trouble. Or trouble found him. By the time Rusty made it to Colorado in 1880, he had lived his share of adventure and violence. Survived fires, shootouts, avalanches, floods, and even walked away from a twister that leveled a whole town like the finger of God. The problem with Rusty is that he is just too dumb to quit and too stubborn to die. He takes his lickings and gets back up with a crooked smile and that gallows humour, only to get beat down again. But that's life, ain't it?

Rusty's acquaintances tell him he's got nerves of steel. Rusty would tell you it's just a head full of bricks. But one thing that never quite sat right with Rusty was those gruesome discoveries on that cold mountain trail. Even the biggest critters don't leave corpses like that. And some of those corpses definitely weren't critters. And they weren't exactly human either. It was about this time that Rusty developed a bad habit for the bottle. Easier to get lost in the whisky than think too hard about those events. And in true Rusty Graves fashion, the best way to deal with a bad situation was to put your back to it and pick a new direction.

Here's hoping that this frontier town of Brimstone has new opportunities for someone who's willing to tough it out. Or at least some cheap cigars. Not as young as he once was, but he can still handle a horse and is decent with the irons. Besides, what Rusty lacks in youthful piss and vinegar he makes up for in perseverance. And as a preacher once told him, there's redemption in suffering, and Rusty wouldn't mind a little redemption right about now. At least until calamity comes calling once again.