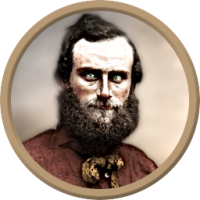 Finley Sloan steps down off the coach and looks around this bustling town of Brimstone with vague memories of a sparse outpost town, but that was years ago. "C'mon Roscoe. Time's a wasting…."

For the past 20 years, "Doctor" Finley Sloan has been working the logging and mining camps as camp doctor despite the fact that a young Finn Sloan was kicked out of physicians college back in 1860. Finn's ideas of science and medicine were deemed far too radical for the highbrow academic types at the time. Finn wonders what they'd say now? But that's a fool's dream. Finn's ideas always made perfect sense in his head but he never could muster the confidence or eloquence to convince others.

After leaving Michigan for a new life in the west, Finn found that necessity made him the de facto sawbones in whatever camp he found work. Being cut off from civilization and supplies for sometimes months at a time, Finn always had to improvise when someone got hurt. Funny how a license don't mean much when a man's life is on the line. And surprisingly, Finn learned that the ghost rock they were mining had superb medicinal qualities when properly applied. Using makeshift parts and supplies from around the camp, Finn devised weird tools and contraptions to harness the power of the ghost rock. These discoveries were not without peril, however. Small fires and minor explosions were a common occurrence around Doc Sloan's tent. Despite a keen mind and medical aptitude, Finn was just a plain old klutz. No one complained about the Doc's results though. Beats a good leeching any day of the week.

The mountains don't change much, but this here town is booming from the rock. Looking around as Finn lugs his travel trunk of weird devices and his lucky stuffed squirrel Roscoe across the street to the Jumping Jack Saloon, he thinks that maybe he stayed in the mountains a little too long. Six years at the last mining camp was the longest stretch he'd ever put in. He had a real bond with those workers and their families after all the hard times they'd been through together. But with the veins drying up the miners set their sights on the new mines opening up around Brimstone. Finn couldn't possibly part ways with them now . Some could barely speak English and others relied on his special medicines. They'd need him. And he'd be lying if he said he didn't need them. He never was good at lying.

And Hell … he could smell the ghost rock burning right here in the streets. Ain't that a wonder. Maybe civilization ain't so bad after all. 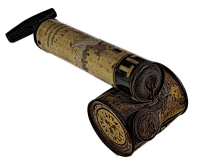