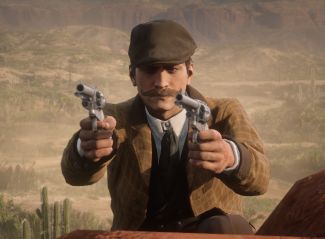 Dr. Henry Ollerton is a Caucasian man with brown hair, blue eyes, and a well-groomed moustache. He stands at 5'8 with an athletic build.

Henry has two outfits: a black suit with frock coat and bowler hat, and a tweed field suit with a flat cap. He is always outfitted with a pair of engraved quick-draw model peacemakers.

In addition to the pistols, Henry usually sports an 1821 light cavalry sabre. A family heirloom gifted to him by his uncle, the late Nathaniel Ollerton. Henry claims the sword was carried by his uncle at the infamous Charge of the Light Brigade.

Henry's other armaments include a Winchester 1876 rifle and a switchblade folding knife.

He is also a practicing medical doctor.

‎
"Born to a somewhat aristocratic family in England, Henry was brought up as a gentleman. He received a good education and learned the typical arts of shooting, swordsmanship and riding. The boy's father had been deployed to Africa with the army for as long as he could remember, so Henry was largely raised by servants and tutors. The boy read extensively, stories of gentlemen conquering new frontiers and exploring the world, and dreamed of doing the same.

Eventually Henry's father returned to English shores, leaving the post of army officer for a career in business. The boy had built a grand picture of the man in his mind, yet reality proved disappointing. Even living in the same home, the boy only caught glimpses of the gruff old officer, and only received communication through orders relayed via servants or notes.

Henry went on to medical school at the insistence of his mother, becoming a qualified doctor at just 19. He joined up with the British Army hoping for battle and adventure across the empire, like he'd read of as a child.

Instead he was met with a veterinarian position with the 11th Hussars, his father's old cavalry regiment, posted to rural India. His enlistment was incredibly quiet - three years of caring for the horses, hunting, and gallivanting with the officers. A few minor scuffles and disappointingly few shootouts later, Henry was growing bored and ready to find somewhere with real adventure.

As Henry submitted his papers to leave the army, his father learned of the news from old colleagues. He wrote to Henry to tell him that he'd arranged for the young doctor to be married to some businessman's daughter, sealing an important deal. Henry dreaded the thought of returning to the dreariness of polite society. He'd tasted so little of the chaos that made life worth living. He decided to set out on his own and disappear.

Africa was off the table. It was the obvious choice and the empire had a strong presence there, word of his location would soon get to his family. Instead, the American frontier beckoned. A chance to ply his trade and live as a free man, far from familial expectations.

Doctor Henry Ollerton set out across land and sea, ready to make his mark on the Wild West."