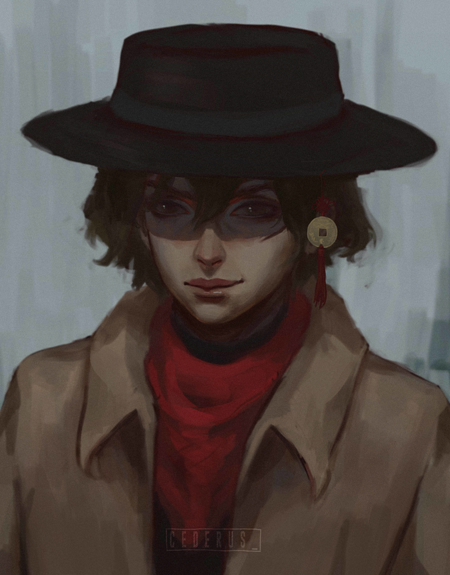 Adelaide "Addie" Barrow. 24. Wears a Chinese good luck charm on her hat specifically on her left side. Says it wards off demons.

September 1878 Left Barrow Ranch after nasty fight with Sydney leading to father in his anger requesting Addie to leave. Addie happily obliges remarking that ""she doesn't want to spend the rest of her life on a dying ranch"".

Early October 1878 Purchased a used copy of Hoyle's while traveling through and while not that good at cards and gambling was able to figure out the book's secrets. Began dabbling in being a huckster, doing minor tricks.

Late October 1878 Wandered into Juarez, Mexico. Ended up getting into a duel with a man in the bar. Her temper got the better of her and she ended up shooting first. The man's bullet grazed her left cheek which would eventually turn into a scar. In the mass confusion Addie fled Juarez, riding hard back to Arizona.

Mid November 1878 Was in a corner of a saloon in Tombstone with the copy of Hoyle's open in one hand and trying to play Solitaire while also trying to practice minor tricks (Trinket spell). Didn't notice a man by the name of Tobias Daltroy watching her closely. She attempted to pulled a card with the Trinket spell, but messed up, resulting in cards exploding out of her pocket. To a random onlooker it appeared like her deck of cards were knocked over. But to Tobias he knew exactly what she was, a newbie huckster. She left the saloon, embarrassed after gathering her cards. He confronted her in an alley, politely introducing himself. She was angry and drew on him with 1851 Navy to which he just smiled and asked her if she was of the mystical persuasion. Initially dismissive, she eventually admitted to having a copy of Hoyle's which was all the confirmation he needed.

Late November to December Tobias Daltroy starts teaching Addie how shoot. He eventually gets to teaching her magic. She's MUCH better at the hexes he taught her than what she attempted from Hoyle's. He helps her buy her Colt Dragoon, which she nicknames Lightning. Also buys the shotgun as the lesson of keeping hexslinging secretive.

Early January Addie spots Wanted posters beginning to circulate in Tombstone and fears for her life. She leaves in the cover of night, leaving a note that she doesn't want him involved in her problems and thanking him for his lessons.

January to February Keeps out of sight, avoiding major towns. Eventually makes her way to Texas, deciding that heading East is the best thing.

March (present day) Got into an alcohol and temper fueled bar fight with another patron which ended up with her in a makeshift jail for the night. She went on a cattle drive up through Colorado with her siblings and once they reached Denver, she split from group and wandered for a few years. She took odd jobs for body guarding and coach jobs. Eventually she wandered into Brimstone after a coach job dropped her off in the town.