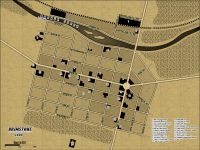 In a less traveled northeast corner of the Territory of New Mexico, surrounded on all sides by the expansive Asphodel Meadows and framed by the Ptolomea Mountains, its the bustling boomtown of Brimstone (population 2,337). Rotten with drunkards, cutthroats, and Hell-manufactured heathens all drawn there to escape the accidental possibility of redemption, this little-burg-that-shouldn’t often becomes the final resting place for the lost. Visitors to Brimstone are largely left alone to their own devices and desires, but occasionally the rutted, unpaved streets run red with the blood of those who have crossed paths with the wrong kind of ornery hombres who don’t suffer fools gladly. For some, it’s a helluva lot easier to resolve a dispute with a dose of hot lead than a long, drawn-out debate, and the local undertakers are never starved for business.

Ranchers used the land for a number of years near what was to become Brimstone as it lay along the original Santa Fe Trail. It never looked like much was going to become of the area at the Cimarron Cutoff siphoned off most traffic from this part of the Trail. That was until 1878 when copper was found in the low mountains around the high plains. Brimstone grew modestly as a town to support the ranchers, farmers, and miners. It was not until 1883 and the discovery of ghost rock that the population of Brimstone really boomed.

For a layout of the town, see the full town map or visit the interactive World Anvil map.

This category has only the following subcategory.

The following 43 pages are in this category, out of 43 total.